Popular
TOP MALE PERFORMANCE PILLS – Male Ultracore REVIEW
Eat Veg, Burn Fat: 6 Hacks to Eat...
Biomanix Review – The Male Enhancement Pill You...
COVID-19: the Ultimate Guide to Protecting Your Health...
10 Reasons Why a Bigger Penis Will Make...
Does working shifts lead to low libido in...
Want to Perform Better Between the Sheets? Ditch...
Staying Fit is the Key to Not Being...
The Most Popular Fitness Myths You Need to...
How Male UltraCore Maximizes Ashwagandha’s Potential
6 Screening Tests Every Adult Male Must Consider...
Home » 10 Causes That Lead to Enlarged Prostate
Sex

10 Causes That Lead to Enlarged Prostate

Your prostate is a relatively small gland that produces fluid that carries sperm during ejaculation. Even though the risk of prostate-related problems increases as a man gets older, men of all ages are prone to different issues. The most common problem is prostate enlargement. Generally, enlarged prostate affects almost all men as they get older, but besides aging many other causes can make the gland bigger regardless of your age. Here are ten causes of the enlarged prostate; some of them will shock you.

Benign prostatic hyperplasia (BPH) is the most common cause of enlarged prostate. BPH refers to the prostate gland is being enlarged which should be non-cancerous that usually affects older men, but in some cases, younger men can develop this problem too. The underlying cause of BPH is unknown, but scientists theorize that hormonal imbalance plays a role.

Prostatitis is defined as inflammation of prostate gland. The inflammation is usually the result of an infection, but some other causes can lead to this condition too. Different types of prostatitis have been identified:

Symptoms of prostatitis include pain or burning sensation while urinating, urgent need to urinate, flu-like symptoms, painful ejaculation, pain in the abdomen, groin, or lower back, blood in the urine. The condition usually affects men aged 50 or younger. Studies show that having prostatitis increases your risk of an enlarged prostate.

The tumor is an abnormal mass of tissue that occurs when cells divide more than they should or when they don’t die when they should. Tumors can be cancerous or malignant or benign or noncancerous. According to the National Cancer Institute, a tumor can also make your prostate gland larger. Studies show that tumor size influences the size of the prostate gland and could play a role in aggressiveness of the disease in men with prostate cancer.

Women aren’t the only ones who experience hormonal imbalance, and men deal with these problems too. One study discovered that men as they age gradually develop an increased estrogen to androgen ratio which correlates with the development of enlarged prostate. Not only that, the prostate is an estrogen target tissue and this hormone, directly and indirectly, influences the growth of the gland.

Prostate health and size are influenced by many factors that go beyond the genital region. What most men don’t realize is that diabetes can also cause enlarged prostate, this is particularly important if you bear in mind that rates of this condition keep growing. Even though studies have confirmed the relationship between diabetes and enlarged prostate, the exact mechanism behind this link is unknown. Multiple factors could play a role including high blood glucose concentration and low testosterone. It is a well-known fact that testosterone levels are positively related to insulin sensitivity.

Millions of men in the US and around the globe have some cardiovascular disease and guess what – it can also increase your risk of an enlarged prostate. Common risk factors associated with heart disease are also behind its link with enlarged prostate including obesity, high blood pressure, diabetes, high levels of LDL (bad) cholesterol, and peripheral artery disease.

Being overweight or obese is a major threat to your health. Besides the increased risk of heart disease, diabetes, or premature death, you also have higher chances of getting enlarged prostate. A study whose findings were published in the Journal of Urology discovered that obesity is a significant risk factor for enlarged prostate, while regular physical activity protects you from this problem and it helps you slim down. 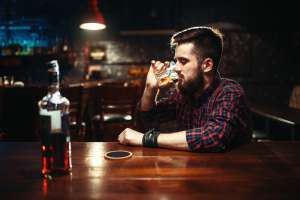 While having a drink or two from time to time is considered harmless, engaging in heavy drinking sessions endangers your health in many ways. For example, drinking alcohol can cause enlarged prostate primarily by affecting hormone levels in affected men. Plus, consumption of alcoholic beverages is strongly related to an unhealthy lifestyle characterized by bad diet, overweight/obesity, and other problems that affect prostate health too.

Smoking is an unhealthy habit that contributes to prostate enlargement. Evidence shows that current smokers have higher mean estradiol levels than non-smokers. As mentioned above, estrogens have a major influence on prostate, which led scientists to conclude that cigarette smoking affects the size of enlarging gland. Along with hormonal imbalance, smoking also damages blood vessels in the prostate. That’s why this unhealthy habit can also hinder the recovery person of a patient who has undergone prostate surgery.

Heredity is truly powerful, and it plays a role in just about any aspect of your life. Prostate enlargement may also be inherited in an autosomal dominant pattern (if you inherit the abnormal gene from one parent, in this case, father, you get the disease) in some families. A study from the Journal of Urology also identified the family history of the enlarged prostate as one of the biggest risk factors that indicate you could deal with this problem too.

An enlarged prostate is associated with a number of symptoms that affect a man’s quality of life. Many different causes can contribute to this major health concern. If you experience symptoms associated with enlarged prostate, consult your doctor in order to get a prompt and accurate diagnosis along with adequate treatment. Strive to have a healthy lifestyle to decrease the risk of obesity, heart disease, diabetes and protect your prostate.