Popular
TOP MALE PERFORMANCE PILLS – Male Ultracore REVIEW
Eat Veg, Burn Fat: 6 Hacks to Eat...
Biomanix Review – The Male Enhancement Pill You...
COVID-19: the Ultimate Guide to Protecting Your Health...
10 Reasons Why a Bigger Penis Will Make...
Does working shifts lead to low libido in...
Want to Perform Better Between the Sheets? Ditch...
Staying Fit is the Key to Not Being...
The Most Popular Fitness Myths You Need to...
How Male UltraCore Maximizes Ashwagandha’s Potential
6 Screening Tests Every Adult Male Must Consider...
Home » 6 Smart Ways to Quit Late Night Eating
Weight Loss

The list is long when it comes to unhealthy habits that people indulge themselves into. But however long the list becomes, late night eating is one of the worse ones that we seem to find difficult to get rid of. It’s become this terrible habit you’ve grown accustomed to that you still eat late at night even when you’re not hungry. As we all know, eating later in the evening cause you to consume more calories that your body requires, leading to weight gain.

Here are 6 things you can do to rectify the whole late-night eating issue:

Determine the reason behind it

Some people eat a lot during the evening or late at night when it should be your last meal of the day that needs to be at the lightest. Nighttime eating may be the consequence of inadequate food consumption during the day, causing you to feel overly hungry at night. It may also be because of boredom or a developed habit.

On the other hand, eating late at night has also been associated with some eating disorders, such as night eating syndrome and binge eating syndrome. Both of these are distinguished by distinctive eating patterns and behaviors, but are also capable of bringing out negative health repercussions.

People with such eating disorders make use of food to rein in negative emotions like sadness, anger, or frustration. More often than not, those afflicted by these conditions eat even when they’re not hungry.

Binge eaters are also inclined to consume food in massive quantities and find themselves unable to control the impulse. Meanwhile, those with nighttime eating syndrome have the tendency to eat throughout the evening. They even wake up late at night to just eat, which makes them guzzle more than 25 percent of their daily calories at nighttime.

Determine what triggers it 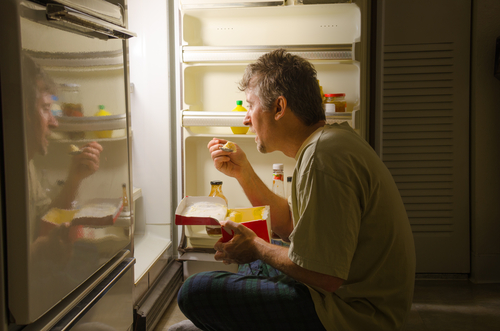 There may be a pattern that leads you to eat a lot late at night and you just don’t notice because you’re pre-occupied in occupying food to your stomach. People resort to food for so many reasons. So, if you aren’t starving but you find yourself ordering a double cheeseburger late at night, you need to think about what led you to that particular decision.

In many occasions, you’ll find yourself wanting to eat in order to meet a need that’s not necessarily hunger. This need may be more emotionally related. To find what triggers your wanton eating at night, you need to track your eating and workout habits alongside your feelings. This will help you determine the patterns, allowing you to work on breaking any negative phases of behavior when it comes to your eating habits.

If you’re eating too much at night because you’re not eating adequately during daytime, then it will be helpful to get yourself a routine. Pre-arranged eating and sleeping schedules will help broaden your food consumption over the course of the day. This way, you’re less likely to feel starved at night.

Moreover, getting sufficient sleep is also crucial when it comes to regulating your food consumption and weight. As part of this routine, you may also find that planning your meal can be useful. Spontaneity in eating may be fun, but it also leads to unpredictability, which causes you to consume more calories.

Planned meals, on the other hand, lead you to settle on healthy choices, which lessen the likelihood of impulsive eating. Plus, with planned meals you’re able to spread your food throughout the day, preventing your from feeling bouts of hunger.

If you think you’re experiencing symptoms of nighttime eating syndrome or binge eating disorder, the next course of action is to consult your doctor. An expert can help determine your triggers and impose a treatment plan. One of the plans used to treat these disorders is cognitive behavioral therapy (CBT).

Learn how to relax 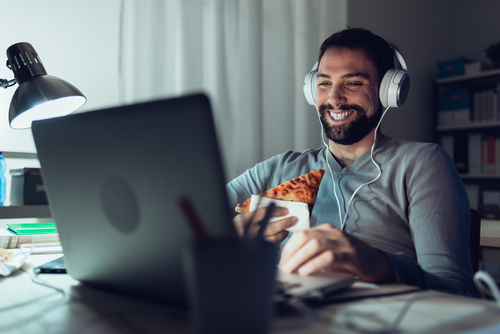 Stress and anxiety are two of the most typical reasons why people eat despite not being hungry. However, food as means to control negative emotions isn’t the smartest solution. If you notice that you always turn to food when you’re stressed or nervous, find another way to release the negativities without filling your stomach needlessly. One way is to learn how to de-stress. This includes breathing exercises, meditation, hot baths, yoga, mild workouts or stretching.

Get rid of junk foods

If you’re prone to eating junk foods late at night, get rid of them. If the junks aren’t accessible for eating, then you’re less likely to eat them. Rather than stocking chips and cookies, fill your kitchen with healthy snacks that you also enjoy. There are lots of healthy snacks that are actually enjoyable. There are fruits, nuts, berries, cottage cheese, and yogurts, among others, to choose from.

Reviewing the Safety & Efficacy of Epibolin

Top 10 Diet Strategies That Will Help You...

Sleeping Off the Pounds – Why Sleep is...

Why Intermittent Fasting May Be Your Key to...

A Review of Pure Moringa Slim

A Product Review of Coffee Blocks

Reviewing the Safety & Efficiency of Adipodex