Popular
TOP MALE PERFORMANCE PILLS – Male Ultracore REVIEW
Eat Veg, Burn Fat: 6 Hacks to Eat...
Biomanix Review – The Male Enhancement Pill You...
COVID-19: the Ultimate Guide to Protecting Your Health...
10 Reasons Why a Bigger Penis Will Make...
Does working shifts lead to low libido in...
Want to Perform Better Between the Sheets? Ditch...
Staying Fit is the Key to Not Being...
The Most Popular Fitness Myths You Need to...
How Male UltraCore Maximizes Ashwagandha’s Potential
6 Screening Tests Every Adult Male Must Consider...
Home » A Basic Breakdown of Food Allergies
Nutrition

When you think of allergies, you might think of the stuffy nose and sneezing that many people get in the springtime. Unfortunately, in many cases, allergies can be far, far more serious. Food allergies are a potentially fatal condition that affect millions of people worldwide. Food allergies can develop at any stage in life, so even if you’ve not had to worry about allergies ever, it’s always a good idea to know what allergies are all about. The first thing to understand is, what exactly is a food allergy?

What is a Food Allergy?

Your immune system protects you from viruses and bacteria by attacking those foreign agents when they enter your body. A food allergy is when that same immune system misidentifies a food protein as one of those dangerous pathogens. The immune response will attempt to fight off the protein, so when you have a bad reaction to food, it’s actually your own body that’s harming you, nothing to do with the food itself. The food protein that triggers this allergic response is known as an allergen. Almost any food can be an allergen to different people, but certain groupings are far more commonly allergens.

It’s important to note, every cell in your body dies, much quicker than you do. Even the longest living cells in your body don’t last past seven years. Clearly, you are older than seven, but technically, none of the material in your body is. Physically, you are partially seven, mostly even younger than that. Thus enters the old paradox of Theseus’s ship. If you are made entirely anew, from completely new materials, are you the same person as you were seven years ago? Philosophy can debate that back and forth, but physically speaking, you do change. That has a lot of implications for allergies. It means that you can outgrow allergies, once all the cells that were allergic are no more. However, it also means that allergies can appear out of nowhere. That’s why, even if you’ve never had an allergic reaction, it’s a good idea to know what common allergens are, and what symptoms of allergic reactions to them look like.

Egg allergies are quite common in children, occurring in approximately one in every fifty children. It’s difficult to avoid, because the protein that triggers the reaction can be in the egg white or the egg yolk. Fortunately, the vast majority of those children will grow out of the allergy. It’s not often that an egg allergy will result in anaphylactic shock, though it is possible. More often, the patient will develop a skin reaction like a rash or hives, feel stomach pain, and possibly have some breathing issues. Eggs are in a great number of processed foods, so if you have an egg allergy, you have to be extra vigilant.

A milk allergy is another allergy that commonly afflicts children, who often outgrow it by the time they grow up. A milk allergy is not the same thing as lactose intolerance; they are both issues with drinking milk, but lactose intolerance is simply the digestive system’s failure to process a part of the milk. An allergy is a specific reaction against the milk, and it can be significantly more serious. Symptoms include upset stomach, vomiting, bloody stool, sometimes hives, and possible anaphylactic shock. Generally, if you’re allergic to one animal’s milk like cow milk, you’re probably allergic to other forms of milk as well. 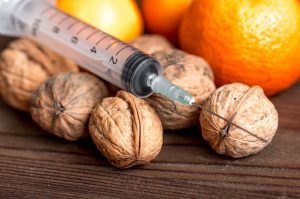 One of the most common allergies out there, peanuts are known for triggering anaphylactic shock, an extremely dangerous reaction where the allergic person’s throat actually closes up and prevents them from being able to breath. Anyone who is allergic to peanuts should carry an epipen at all times, as seconds can be the difference in the case of anaphylactic shock. Though it is most commonly known for anaphylaxis, peanut allergies are actually more likely to cause itching, nausea, hives, and congested sinuses.

Peanuts are not actually nuts, they are legumes. The whole tree nut family, on the other hand, is connected, and they are nuts. However, peanuts and tree nuts do have one thing in common: they are the most likely allergens to cause anaphylactic shock. Tree nuts have a long list of other possible symptoms though, including diarrhea, abdominal pain, nausea, vomiting, itching around the mouth, congestion, and shortness of breath.

When thinking of a wheat allergy, you might think of celiac disease. However, as with lactose intolerance, celiac is more of an inability to digest, whereas a wheat allergy is an active response. One common way that a wheat allergy will manifest is as hay fever, causing a lot of coughing, sneezing, and sniffling. As with most forms of allergies, anaphylaxis is possible, but not very likely. Headaches, skin reactions, and congestion are far more common responses. Wheat is, unfortunately, in nearly everything that has bread, so having a wheat allergy means a lot of careful eating. 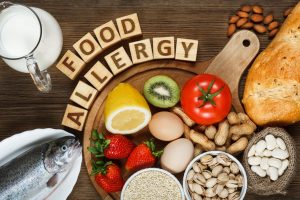 Soy is another allergen that mostly effects small children, and most children do grow out of it. Soy is an added product in a number of processed foods, so keep an eye out for it in everything if you have a soy allergy. It will generally cause itching, nausea, or skin reactions.

Fish is the reverse from many items on this list. Instead of being something that shows up mostly in children, most people with fish allergies don’t get them until they are in their 40s. Symptoms are much the same as many other allergens, skin reactions, breathing issues, nausea, and possible anaphylaxis.

Those who are allergic to fish aren’t necessarily allergic to shellfish as well, as the two allergens are different, but shellfish are one of the most common allergies out there. Even worse, shellfish, next to peanuts and tree nuts, is one of the most likely allergens to cause someone to go into anaphylactic shock. Other symptoms, beyond the usual, include a weak pulse, swelling of the tongue or lips, trouble swallowing, and dizziness.

Ways To Have Fun With Your Infant Or Toddler