Popular
TOP MALE PERFORMANCE PILLS – Male Ultracore REVIEW
Eat Veg, Burn Fat: 6 Hacks to Eat...
Biomanix Review – The Male Enhancement Pill You...
COVID-19: the Ultimate Guide to Protecting Your Health...
10 Reasons Why a Bigger Penis Will Make...
Does working shifts lead to low libido in...
Want to Perform Better Between the Sheets? Ditch...
Staying Fit is the Key to Not Being...
The Most Popular Fitness Myths You Need to...
How Male UltraCore Maximizes Ashwagandha’s Potential
6 Screening Tests Every Adult Male Must Consider...
Home » Hair Loss And An Exciting New Hair Growth Enhancer
Health

Losing several strands of hair a day is quite normal. But when you’re showing bald patches already, each strand matters. They say that once baldness starts, there’s no turning back anymore. But recent studies indicate there might be hope.

Hair loss, also referred to as alopecia, comes in various forms and severity. Of course, it’s only natural that as we grow older, some of our hair follicles no longer stay active. This is called involutional alopecia which is hair loss caused by aging.

However, age is not the only factor that causes hair loss which is why we often see men in their 30s or 20s who are already starting to sport receding hairlines. This condition is referred to as androgenic alopecia and is more commonly called male pattern baldness. This is hereditary, unfortunately, and no one can really predict at what age it will start happening.

The only difference is that in women, it will start showing at around age 40 or even later. In men, though, it can start as early as during teenage years. Androgenic alopecia is one of the most common types of hair loss.

For men, it usually starts with a receding hairline, then the bald patch grows until all hair from the frontal scalp up to the crown disappears. For the ladies, hair all over the scalp gradually thins, with the crown area showing the most hair loss. 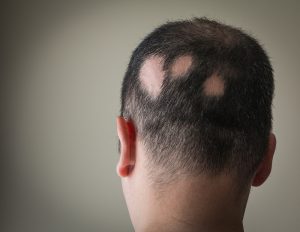 Compared to androgenic alopecia, however, alopecia areata would seem only temporary. The condition is characterized by patchy hair loss, and it can even happen to kids. The onset is usually sudden, but the good news is that in most cases, hair grows back after quite some time.

Factors That Cause Hair Loss

Genetics is considered as the most common factor that leads to hair loss. However, it’s not the only thing that causes baldness in both men and women. Other factors are physiological in nature while others are psychological.

Of the physiological factors, hormonal imbalances, medical conditions, and medications are common factors that influence hair loss. For instance, even a slight increase in the levels of DHT, one of the derivatives of testosterone, can cause hair loss in women. DHT or dihydrotestosterone affects men, too.

Medical conditions such as lupus and thyroid diseases can also result in hair loss. Both hypothyroidism and hyperthyroidism can cause loss of hair on the entire scalp. In most cases, hair loss caused by thyroid disorders are reversible, although it may take several months before hair grows back.

Lupus, on the other hand, causes lesions on the scalp. These lesions damage the hair follicles which is why hair loss due to lupus tend to be permanent. In fact, any condition that can cause scarring or damage to the hair follicles, even ringworms, can cause hair loss.

Just like lupus, other autoimmune diseases such as psoriasis may also result in alopecia areata, although most of the time the hair loss is only temporary. Other factors that may cause hair to fall out include stress, chemotherapy, taking blood thinner medications, and injuries or burns.

There are many herbal medicines that are promoted as hair growth enhancers. Many of these botanicals are also used as ingredients in shampoos and hair products just like aloe vera. Jojoba oil is also often used as a scalp moisturizer and is promoted as a natural remedy for hair loss. 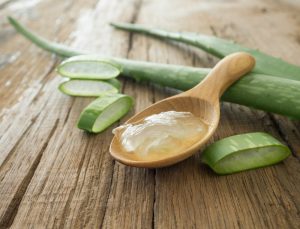 Licorice root and onion juice have also been found to increase hair growth and prevent hair loss. Recently, coconut milk has become popular for its various health benefits. Coconut milk is also used as a hair and scalp moisturizer.

In truth, scientists are still trying to figure out what exactly causes hair loss which is why a cure that can fully reverse baldness has yet to be developed. There are available treatments, though, that promote hair growth, although it will work differently depending on the type of hair loss and what triggered it.

The interesting thing about hair loss medicines is that they were originally intended to treat other conditions. For instance, minoxidil, which was introduced into the market in the late 90s, was supposed to be an anti-hypertension drug. However, they found out that it promotes hair growth and so it became popular as a hair loss topical treatment.

Another hair loss drug, finasteride, was originally developed as a treatment for enlarged prostates. Finasteride works as an anti-androgen, and it works by inhibiting dihydrotestosterone. Just like minoxidil, finasteride’s effect on hair growth is only a side effect and yet the drug got approved as a hair loss treatment.

Recently, scientists have discovered that a new drug may potentially treat hair loss. And just like minoxidil and finasteride, the positive effects of this drug on hair growth is also just a side effect. What’s different this time is that scientists were able to identify the protein that prevents hair from growing and how it does that.

According to the study, Secreted Frizzled Related Protein 1 (SFRP1) is the protein that’s responsible for androgen alopecia. The protein blocks hair growth at the follicle level. The drug was initially being developed as a treatment for osteoporosis, however, the discovery of this side effect led the scientists to test how it can restore hair growth.

What the researchers did was to test the drug in an in vitro setting. They got samples of scalp hair follicles and treated the follicles with the drug. The results showed that the drug stopped SFRP1. Thus, because the protein was no longer inhibiting the follicles, hair was able to grow again.

Unfortunately, this study is only initial and the drug has not been tested on live humans yet. Nevertheless, the results look promising and we may be seeing this new anti-baldness treatment out on the market a few years from now.