Popular
TOP MALE PERFORMANCE PILLS – Male Ultracore REVIEW
Eat Veg, Burn Fat: 6 Hacks to Eat...
Biomanix Review – The Male Enhancement Pill You...
COVID-19: the Ultimate Guide to Protecting Your Health...
10 Reasons Why a Bigger Penis Will Make...
Does working shifts lead to low libido in...
Want to Perform Better Between the Sheets? Ditch...
Staying Fit is the Key to Not Being...
The Most Popular Fitness Myths You Need to...
How Male UltraCore Maximizes Ashwagandha’s Potential
6 Screening Tests Every Adult Male Must Consider...
Home » Is LASIK Surgery Right for You?
Health

Is LASIK Surgery Right for You?

LASIK surgery came out in the 1990’s, when technology was hardly at its peak. The procedure was looked upon as if a miracle was granted to people who couldn’t see all that well, the miracle of sight. People that were plagued with wearing contacts and/or glasses each and every day could now feel free once again, carrying no eye baggage with them day in and day out. However, through all the excitement back then, no one ever really questioned if it was the safest way to achieve better eyesight, until now.

As of recent, certain questions have been brought to light regarding LASIK eye surgery complications. Some testimonials claim that short and long-term side effects may, or have, occurred in their lives. Such side effects consist of blurred vision, double vision, dry eyes, burning sensations, and sensitivity to light after surgery. And, what’s worse is that some patients have claimed such side effects lasted several years after the procedure had taken place.

So, at this point, I would like to ask all of you, is LASIK surgery right for you? Read on to help answer the question if you haven’t decided just yet.

Though approximately 90% of patients come out of LASIK surgery feeling refreshed and brand new, the other 10% come out of LASIK surgery feeling worse than they did before. Some patients have reported even worse side effects than listed above, such as seeing starbursts, glares, and even permanent halos. Some cases worsened, leading to mental side effects like depression, interference with life such as job loss, and even suicide.

So, the question at this point is, is LASIK surgery right for you? I know I’m asking it again, but I just want you to be sure of yourself. Continue reading.

Even after I’ve told you all the nasty side effects of this surgery, you’re probably still contemplating finding another opinion, or doing some more research. That’s okay, I’m here to guide you through this ride once again. Are you ready to find out if these claims about LASIK surgery are faulty or true? Let’s check it out.

What is LASIK surgery? 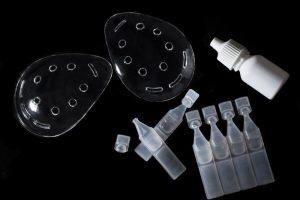 LASIK surgery is a rather simple eye procedure that takes approximately 15 minutes to complete. During the procedure, the first laser is used to make a thin flap in the cornea of your eye. After the flap is created, the second laser is used to correct whatever went wrong in the eye in the first place. The flap is then put back into place to protect the eye and start the healing process.

This surgery is used to treat a wide variety of eye issues (sight related, of course). Such issues consist of farsightedness, nearsightedness, and astigmatism.

And, what’s more, is that millions of people have had this surgery done to them. Bonus? The recovery time is incredibly quick.

Are there really any risks or side effects to LASIK surgery?

Before we talk about the risks and/or side effects, I’d like you to take a moment to think about what the procedure entails. If you feel as if you can get through the procedure without having a panic attack, then you should continue to read on.

If you decide you want to go through with the procedure, the next step would be to see if you’re even a valid candidate. Sometimes, certain eye conditions will not allow you to have LASIK surgery, though, this doesn’t happen very often. An example of an eye condition that would not allow you to follow through with the procedure would be if you had a very weak cornea that could not handle going through such lacerations. Another instance would be if you had cataracts.

Anyways, as for any risks or side effects of the surgery, they are very minimal. However, they are there.

Most side effects occur within a day or so after surgery, and they aren’t severe at all. The most common consist of dry eyes, uncomfortable sensations in the eyes, light sensitivity, and eye irritation. Sometimes, though not often, night vision problems may arise, such as glares, halos, ghosting, or starbursts.

Most medical professionals warn of these symptoms but claim that they should not last past the first week after surgery. If they do, seek care immediately.

Is the procedure SAFE? 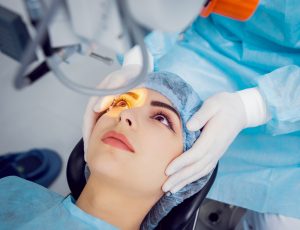 Let me be the first to say this, every surgery has some risks involved. That doesn’t omit LASIK surgery. However, more often times than not, the surgery is a huge success. In other words, the long-term helpful effects outweigh the short-term crappy effects. As a matter of fact, most medical professionals, eye care professionals in particular, claim that after LASIK eye surgery, their patients can see outstandingly better than they could before. For example, one doctor even claimed their patients see extraordinarily better just weeks after the surgery than what they did prior to the surgery, even if they had their best glasses on.

Do you need another confidence booster in why LASIK surgery could be right for you?

Okay, here goes. Most eye care professionals have even had the procedure done on them, and they say it’s one of the best things they could have ever done for themselves. In other words, this inspires confidence in their patients due to the fact that these eye care professionals trust the surgery so much, they’re will to have it personally done to them.

So, even after all the side effects I stated in the beginning (that I had to warn you about, just like all prescriptions on commercials have to warn you about the 900 side effects that COULD happen), I’m telling you that this surgery is tenfold more positive than negative. Don’t be scared just because you see a few odd side effects that have to be listed due to lawful purposes. Do a little personal research, have confidence that many health care professionals are doing it, and dive right in. I’m sure you’ll love your new eyes just like I love my new eyes.

Take a risk with LASIK surgery like I did; The side effects are minimal for a lifetime of seeing again.

Considering Weight Loss Surgery? Here’s What You Need to Know

Myths about Sex You Need To Stop Believing