Popular
TOP MALE PERFORMANCE PILLS – Male Ultracore REVIEW
Eat Veg, Burn Fat: 6 Hacks to Eat...
Biomanix Review – The Male Enhancement Pill You...
COVID-19: the Ultimate Guide to Protecting Your Health...
10 Reasons Why a Bigger Penis Will Make...
Does working shifts lead to low libido in...
Want to Perform Better Between the Sheets? Ditch...
Staying Fit is the Key to Not Being...
The Most Popular Fitness Myths You Need to...
How Male UltraCore Maximizes Ashwagandha’s Potential
6 Screening Tests Every Adult Male Must Consider...
Home » Sleeping Off the Pounds – Why Sleep is Crucial to Weight Loss
Weight Loss

Sleeping Off the Pounds – Why Sleep is Crucial to Weight Loss

Table of Contents show
1 Your Hunger Gets Out of Control
2 You Lose Less Fat and Gain Less Muscle
3 Your Brain Function is Negatively Affected
4 Lower Insulin Sensitivity
4.1 1. Do a wind-down ritual before bed:
4.2 2. Limit your caffeine intake:
4.3 3. Aim for seven to nine hours of sleep:
4.4 4. Set an earlier bedtime:

You’ve got a great workout routine going, a healthy diet that you’re following to a tee, but you’re still not seeing the results from your hard work. Maybe you lost a few pounds here and there, but there’s very little progress. What could be the problem? It might just be your sleep or lack of it.

According to the CDC, more than 35% of people are sleep deprived. This is generally defined as getting less than seven hours of sleep per night. We often think that sleep gets in the way of getting things done, but what it’s really getting in the way of is our ability to lose weight, even if we are controlling our diet and exercising regularly.

So how exactly does lack of sleep affect your weight?

Your Hunger Gets Out of Control

Not getting enough sleep impacts the part of your brain that craves food.  If you’re sleep deprived, you might find yourself raiding the pantry or fridge late in the night or craving foods that tend to be higher in carbohydrate content. Lack of sleep can also cause you to choose a larger meal or bigger portion sizes, making that second helping of mac and cheese seem really appetizing. Not getting enough sleep also throws your hormones off balance. One such hormone is cortisol, which rises when you don’t get enough sleep. Cortisol is the stress hormone that not only makes you want more food, but it also makes you hold onto more fat. 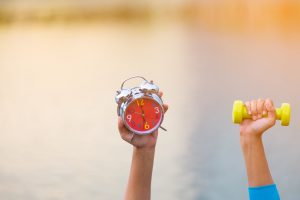 In a study published in the Annals of Internal Medicine, a group of dieters was put on different sleep plans. For the dieters who had an adequate sleep, half of the weight they lost was from fat. When the amount of sleep was reduced, they lost only half the amount of fat they did before, even though they made no changes to their diet. The other side of this coin is that you won’t be able to gain as much muscle. Muscle helps burn fat, but lack of sleep decreases your body’s ability to make muscle and can even cause muscle loss.

Your Brain Function is Negatively Affected

Even just one night of sleep deprivation can affect the frontal lobe of your brain, which controls complex decision-making. The loss of mental clarity from lack of sleep can feel similar to being drunk. You might end up making poor decisions about your health throughout the day, including ordering that creamy latte you normally wouldn’t order or polishing off an entire bag of potato chips because you just couldn’t make yourself stop. You might even be able to convince yourself that you’re too tired to go to the gym or end up driving to work instead of walking as you usually do.

Insulin helps us process fat. Researchers at the University of Chicago found that after just four days of poor sleep, the body’s ability to properly use insulin is disrupted, and insulin sensitivity dropped by more than 30%. What does this mean? Lower insulin sensitivity reduces the ability of your fat cells to get rid of fatty acids and lipids, and they end up getting stored in your body. Not only can this lead to weight gain, but also diseases like diabetes.

So what can you do to improve your sleep habits and lose more weight?

1. Do a wind-down ritual before bed:

We tend to think of little kids when we talk about bedtime routines, but there’s a reason why this works. Winding down before going to bed puts both your mind and body in a more restful state, helping you fall asleep more quickly and enjoy higher quality sleep throughout the night. At least an hour before bed, turn off your devices and give yourself some screen-free time. Instead of ending your day with a TV show, read a book or listen to a podcast. Instead of scrolling through your social media feed right before you shut your eyes, spend that time stretching or meditating. Both of these activities are calming and can help get you ready for a good night’s sleep. 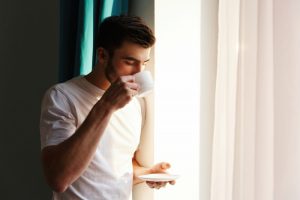 Caffeine can remain in your body for 5 to 6 hours, so do the math. For most people, this means no coffee after 3pm. If your afternoon coffee run with your coworkers is one of the highlights of your work day, you don’t have to skip it. Order a decaf option or try a non-caffeinated drink. You can usually find herbal tea or juices at most coffee shops. You’ll also want to avoid eating too much chocolate or drinking soda late in the day.

3. Aim for seven to nine hours of sleep:

There is no magic formula for the number of hours of sleep you should get each night, but seven to nine hours of sleep is generally a good rule of thumb to follow. Sometimes that’s just not possible given our busy lives, but if you do miss a good night of sleep, try to avoid stacking on additional nights of poor sleep, which can compound the effects of sleep deprivation and bring your weight loss to a halt.

If you’re a night owl who is used to staying up till midnight or later, you might find it hard to make the necessary changes to your schedule to get enough hours of sleep. The best way to do this is to adjust your bedtime gradually. Don’t try to move your bedtime up by two hours the first night. Instead, shift your bedtime by 15 minutes every day so that your body can slowly get used to the change. Eventually, you’ll get into the habit of sleeping earlier and feeling better throughout the day.

If you’re serious about losing weight and have not been seeing results despite a good diet and regular exercise, try getting some more sleep. You will feel less tired and less hungry, and best of all, you’ll start sleeping off the pounds.

Eggs have a lot of Protein, Yet These Foods Have More

Medications For Urinary Symptoms Can Ruin Your Sexual Function

Top 10 Diet Strategies That Will Help You...

Why Intermittent Fasting May Be Your Key to...

A Review of Pure Moringa Slim

A Product Review of Coffee Blocks

Reviewing the Safety & Efficiency of Adipodex